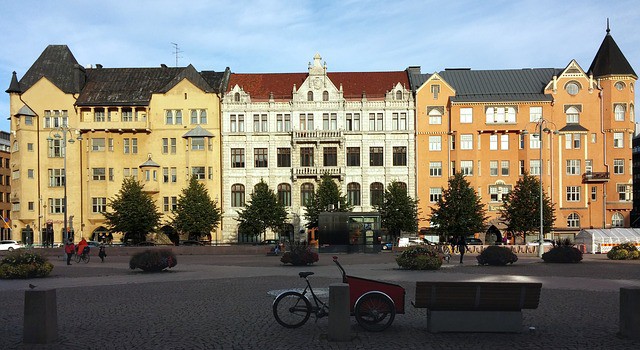 Finland is a very singular country with an interesting culture of generally more quiet, introverted no nonsense people. But how widely spoken is English there? Can an American or British tourist get by in Finland without needing any Finnish?

English is quite widely spoken in Finland, though not quite as prevalent as the other Scandinavian countries. Around 70% of Finns report being able to speak English, many of them fluently, which is a very high proportion in itself and compares favorably to most other countries outside of Scandinavia.

You will have no problems getting by with English in Finland with anyone under the age of 60, whether in the capital Helsinki or anywhere else in the country. The universal account of tourists who visit there is that Finnish is not needed as English is widely enough spoken pretty much everywhere for get you by.

The official stats from a 2012 survey place the proportion of English speakers at 70% of the Finnish population. Neighboring countries like Sweden and Norway have higher English proficiency even still, with rates in the mid to high 80s percent mark. However, even 70% prevalence is still plenty enough for English speaking tourists to get by fine visiting Finland.

English has been taught in Finnish schools for a very long time now, so most people except the very oldest generations will be able to speak it to some degree, many of them very fluently. What sets the Scandinavian countries out from the rest of the world is not just prevalence of English speakers, but the excellent command and fluency in English they have.

A 2015 survey placed Finns fourth in the world for English speaking proficiency, with the highest competency in the legal and tourist professions, but with very high overall fluency across the whole sample. Even the weaker sectors in Finland were still higher than the international average.

Their competency tends not to be limited to just a few basic words, as it can be in other countries. Rather Scandinavians tend to be able to hold fluent and intelligent conversations in English without too many problems. The Finns are no different, with fluency rates still very high, though not quite up there with neighboring countries.

Formula 1 driver Kimi Raikkonen’s excellent command of English, combined with a dry, no nonsense sense of humor, perfectly sums up the Finnish mentality.

That said, in spite of all of this talk of English fluency, the Finns in general are not known to be the most talkative population in the world. They are usually very helpful and friendly when approached, but generally only talk when they have something to say, not because they have to say something.

There is the old joke about the two Finns in the bar that sums up this mentality well. One of them starts asking about the other’s life, to which to second Finn simply responds “Are you here to talk or are you here to drink?”. Finns tends to be shy and economical with words, but very friendly and loyal once you get to know them. They also like a drink or two!

Finland is one of those countries where you really should be fine with English and be able to get by without any Finnish. However, it still always helps to have a few basic phrases to at least show appreciation for the locals and the culture. Natives always appreciate it even if it isn’t strictly necessary in the Scandinavian countries.

The Finnish language is consistently ranked as one of the most difficult to learn, due to complex verb and sentence structure which can take many years to master. However, learning a few basic phrases is not usually too hard. Here are some of the more common ones you might need.

If you’re looking for a language learning app, Mondly offers 41 languages (including Finnish) for you to learn on any device, with plans starting from $4/month, and a free version also accessible with no signup required. It is used by over 100 million people worldwide and has excellent overall reviews with it’s easy user interface and emphasis on quick learning and progress. See our overview of the platform here.

Even from these basic phrases you already see some of the complexity in the Finnish language, since many words are pronounced very differently to how they appear on screen. There is not much to do here except learn the pronunciations for the main few phrases and hopefully converse in English from there. Learning fluent Finnish can take years.

Note that there isn’t really a word for “please” in the Finnish language, so you don’t have to worry about being seen as rude so much as in other countries. The mentality there tends to be no-nonsense – you ask for something, you get it. There isn’t much room for unnecessary small talk or niceties. Kiitos can be used at the end of sentences but often isn’t.

The Finns are also not very emotive or expressive as some other cultures are. They don’t like over the top greetings or compliments, or any drama in general in personal interactions. They are a low key bunch of people so more personal greetings and warmth is reserved for established friends and family rather than strangers. That said, Finns will always help you out if asked.

For more adventurous travelers and longer term visitors to Finland who really want to make the effort to learn the language despite not strictly needing to, there are some Finnish courses available.

link to How Widely Spoken is English in Sweden?

Sweden is a popular and prosperous Nordic country, known for it's social equality and high standard of living. But just how popular and prevalent is English there. Can a tourist expect to get by in...

Continue Reading
link to How Widely Spoken is English in Norway?

Norway is a lesser known but still popular tourist destination, with a wealthy, vibrant economy and friendly people, but just how widely is English spoken there? Can a tourist passing through Norway...