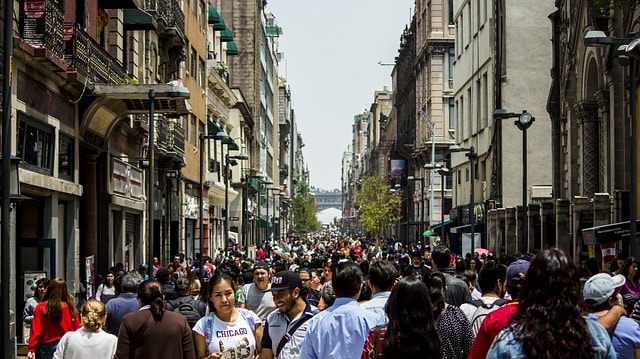 English is not very widely spoken in Mexico overall, with only around 10% of the population speaking it, and only a small number of these being truly fluent. English is however much more prevalent in the major tourist destinations and towards the Northern border with the USA.

Official stats place the percentage of Mexicans who can speak English at around 12% or about one-eighth of the population, with the lower amount of around 4% able to speak fluently. Many of this small minority though will be concentrated in the main tourist regions like Cancun, Mexico City and wealthier neighborhoods where the residents have been educated to a high standard in private schools or universities.

Where You’ll Be Fine With English

As with most countries, you’ll be fine with English in the places that tourists tend to go, since people here will be used to dealing with English speakers. More than 10 million Americans alone go to Mexico each year, so the main tourist spots will be well prepared to help English speaking tourists.

Here are some of the tourist spots where English will be widely spoken in restaurants, bars, tourist attractions and resorts:

If you are dealing with hotel staff, waiters and staff at tourist attractions in these places, as well as younger people in general, you should be fine speaking English. In all inclusive resorts you will also be covered. if someone you ask doesn’t speak English, there will be someone close by who will. You probably won’t need any Spanish in these places.

Similarly, for people looking to relocate to Mexico City specifically longer term, for work or retirement, there are some certain zones where English will be more prevalent. Look for the more affluent areas like Condesa-Roma, Polanco and Coyoacan, where there will be lots of well educated people who speak English well as a second language, and also a growing number of English speaking expats who have set up there themselves.

Elsewhere in the country, the prevalence of English will start to fall off dramatically. In the larger cities, like Mexico City, Monterrey and Guadalajara, English may also be widely enough spoken for you to get by in the more central, touristy parts especially, but fluency may still be hit and miss once you are out of the main tourist zones and attractions, aside from the wealthier parts of Mexico City mentioned just above.

In larger hotels and department stores in the major cities, there will usually be at least one person who speaks English who can help you out. In smaller shops or hotels, (3 star or less), then you may struggle to find English speakers so readily. Taxi drivers will also rarely speak English – have your hotel’s business card ready to hand to drivers plus the names of places you need to go to avoid any confusion.

Similarly, if you are staying in Mexico longer term, there are also some basic things you will need to do that Spanish will really help you out with. Large parts of Mexico have a very nice climate year round, so many people from North America and Canada are migrating South for the better weather and other lifestyle benefits.

For these longer term stays, having some Spanish is pretty much essential for doing a number of things. Firstly, setting up a bank account, or any other account where you are signing a contract, ideally requires you to know some Spanish. Very few bank clerks or staff will speak English – you may be able to find the odd person if you shop around the different banks – so Spanish will help you get the process of getting a bank account moving.

See this excellent guide to opening a bank account in Mexico. All the documentation and contracts will be in Spanish however, so it is important to know what you are signing and what fees you may be charged in what circumstances. The same goes for mobile phone and internet contracts, and anything else that you sign up for long term.

If you are renting a room or apartment, the contracts will also be in Spanish only, and again you need to know what costs and charges you are signing up for before agreeing to a lease. Having some basic Spanish will help you sift through rental agreements and make sure you are not being scammed with extra charges on top of your main rent.

Using public transport is also an area where having some Spanish will help. The train signage is reasonably easy to navigate but buses are more hap-hazard and random in their timetables and routes, and so it can help to be able to communicate with drivers in Spanish to make sure you are going where you think you are!

The Teaching of English in Mexico

Looking into the issue of the teaching of English in Mexico, we found much the same problem as we did when looking at the prevalence of English in Brazil – social and economic inequality is a large determinant of whether someone in Mexico will be able to speak good English. In other words, the richer and more privileged have far more chance of being able to speak decent English, as opposed to the poor or working class who do not have access to the same resources.

This is in contrast to the Nordic countries like Sweden and Norway for example, which have extremely high levels of English proficiency across the entire population, with pretty much everyone being taught to the same high standard of fluency. In Latin America there is more inequality in the way people are taught English.

English is now mandatory in public schools, being taught from 7th grade onwards, but not to a particularly high or rigorous standards. Classes are usually only a few hours a week, with a focus on written and not spoken proficiency, so it is difficult for the general population to get competent verbally with this level of practice.

Contrast this with the Nordic countries, which often teach English on a daily or almost daily basis, and also have much more exposure to undubbed English language TV and films, then you see why regular exposure to English in all different forms and not just in a dry academic “vocab list” form is so important to young people being able to gain real fluency and competency.

More advanced English lessons are offered by private schools and institutions, and most people who graduate from university are expected to be fluent, but obviously only the middle and upper classes can afford these and so social mobility remains low for the poorer population who cannot afford this tuition and are stuck with the much lower standard of teaching in the public schools.

As a result, despite this formal training that is given in the schools, not many people reach proper fluency in English, since there is not enough verbal practice to really develop proficiency. The quality of the teaching is also lacking in many of the schools, with even the teachers themselves often not being very fluent.

Is Mexican Spanish The Same as European Spanish?

Spanish is the offical language in Mexico and most of the rest of Latin America, but the Spanish spoken there does differ from that spoken in Spain. There is a broad similarity in many words but some differences in grammar, words and proununciation between the two dialects.

See the video below for a summary of some of the key differences. One of the main ones is that Mexican Spanish tends to use “vos” instead of “usted” for the “you” personal pronoun, including all it’s variants like vosotros instead of ustedes for the plural “you”. There are also some particular word differences.

Given the low prevalence of English in Mexico overall, it will certainly help to learn some basic Latin American Spanish. You may be OK getting by with English if you are just staying in an all inclusive resort in one of the main tourist areas, but venturing further out into the cities and suburbs, English will become far less prevalent and some Spanish will come in useful.

Thankfully there are resources online and courses specifically offering teaching in the Latin American variants of Spanish, incorporating the specific differences in grammar and prounciation that is a feature of the Spanish spoken there as opposed to the dialect used in Spain.

If you’re looking for a language learning app, Mondly offers 41 languages for you to learn on any device, with plans starting from $4/month, and a free version also accessible with no signup required. It is used by over 100 million people worldwide and has excellent overall reviews with it’s easy user interface and emphasis on quick learning and progress. See our overview of the platform here.

If you want to learn Mexican Spanish in more detail in CD form, then check out this introductory Spanish course by Patrick Jackson on Amazon, with 30 lessons and around 20 hours of learning material. It is specifically built to teach the Latin American version of Spanish and is ideal for people looking to go on holiday or relocate to Central or South America. It is available for free with a no risk trial of Audible.

link to An Overview & Review Of The Key Features of Mondly

NB. This article contains affiliate links Mondly is one of the main language learning apps that's usually considered as an option when someone wants to learn a new language, alongside Babbel and...

Continue Reading
link to The 5 Hardest Things About Learning Italian

Italian is in many ways one of the most beautiful and flowing languages when we hear it spoken, but it is also not one of the easier ones to learn in my experience. Learning vocabulary, verbs and...