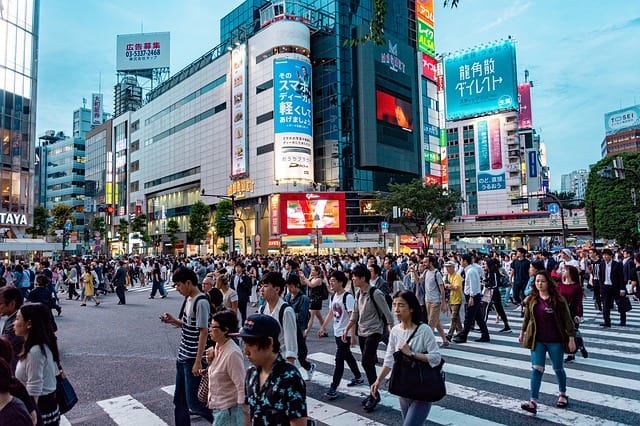 Japan is another popular tourist destination in the world, with a bustling, unique, high tech culture, but just how widely spoken is English there? Can a British or American tourist visiting there for example expect to get by just using English and without knowing any Japanese?

The prevalence of English speakers in Japan is actually very low, and tourists should not expect many of the locals to be able to speak English when visiting there. Knowing some basic Japanese phrases and having resources to hand like Google Translate and Google Maps is essential for English speakers travelling around Japan.

It is quite hard to find natives there truly fluent in English; however that said we could not find any accounts of people saying it was really difficult to get around even in spite of this language barrier. English signage plus using some trusty map and translate resources plus bumping into the odd English speaker usually allows you to get by.

Japan recently ranked 40th out of 48 countries for English proficiency on the Test for English for International Communication (TOEIC) metric, meaning that Japan is one of the weaker countries in terms of the number and quality of English speakers there.

Estimates vary but a 2013 study found

that only around 20-30% of Japanese people reported being able to communicate in some form of English to some level. For many of this proportion though, their English proficiency is probably restricted to purely written form with maybe a few basic words of spoken English. Real conversational fluency in English is very rare in Japan, probably at lower than 10% of the population.

The government has ploughed a tremendous amount of resources into trying to improve the proficiency in English of it’s general population through schooling, but this has struggled to have much of an impact, partly due to the quality of the teaching but also simply because he differences between the English and Japanese languages is so big in terms of grammar, syntax and pronunciation.

For people visiting Japan, it is difficult to find many people who speak English anywhere, but your best bet is in the main hotels, information desks and tourist spots in Tokyo especially and to a lesser extent other cities like Osaka, Kobe and Kyoto. Staff there will usually have at least basic English, enough to get by, though not fluent.

Similarly, the main tourist attractions will have leaflets in English, and menus in restaurants and a lot of the signage in the major cities is also in English as well as Japanese to help you out. Knowing a couple of the key Japanese phrases – excuse me/please/thankyou – will also help you out. See our section further below for more on this.

Other than than it is often a case of the stereotypical tourist pointing and gesturing, some patience and perhaps pulling out the iPhone and using Google Maps or Translate to help cross the langauge barrier. On the plus side Japanese people are known for being very friendly and willing to help out in any way they can.

As another precaution, also be aware of the different signs for male and female in Japanese to avoid any embarassment going into the wrong toilets for example. Sometimes the signs are only marked in Kanji and not English so you need to be able to know the difference.

Japan has a very comprehensive train system within and between the major cities, but despite the English signage it can be a nightmare knowing which train to get on and there not many English speakers who can just tell you.

For this problem the Hyperdia

service is a great solution and is highly recommended by tourists. It provides a full timetable and route search for Japanese trains and also buses, and is also available as an Android app.

The bus services by contrast are known to be slightly less helpful, often with Japanese only signs. For these trips it is advisable to plan ahead, use Google maps and apps such as Hyperdia, and have your destination written down in clear, block capital English as well as Japanese to give any locals you approach the best chance of helping you out. Japanese people by and large have a better chance of being able to read rather than speak English.

The Teaching of English in Japan

See this excellent article by the BBC

on the prevalence of English in Japan. It has been taught in schools since World War II, being compulsory from the age of eight or nine onwards, but the standard of the teachers and teaching is quite poor, focused only on vocabulary and written practice, with little emphasis on actually practising English in spoken form.

As a result, even though the Japanese are technically being taught English, it is only in a dry theoretical form and as a result many of them are not well practised or confident using it in spoken form in daily life. As a result, many of the already small percentage who can speak English in Japan will also not be very fluent or confident and may only manage a few words at best.

This discrepancy often shows up in some tourist’s accounts of Japanese locals being able to understand written English on a screen, but really struggling to understand spoken English, with perhaps all the different accents like British, American, Australian and Canadian confusing them even more.

This is an issue which has come into sharper focus in Japan recently, with the 2020 Olympics coming up. The government is well aware of the high number of English speaking tourists and athletes who will be coming over and wants to improve the standards of English among the population in readiness for this event.

There is a shortage of high quality English tutors in Japan though, with a good enough grasp of English to really teach it well in a practically usable form to their students. As a result, there are some younger Japanese people who can write and read English to some degree, but very few who can actually speak it well.

The culture of perfectionism prevalent in Japan also does not help, with English learners somewhat reluctant to practise it verbally unless they are sure they can get it 100% perfect. There are not many opportunities to practise it in Japan though, so it becomes a little bit of a vicious circle.

Due to this language barrier, it is really ideal for holidaymakers visiting there to learn some basic Japanese, perhaps not with the hope of becoming fluent, but just to endear yourself a little better to anyone you approach for help.

Having even the basic phrases such as please and thank you can really help break the ice with the locals and make them more willing to help you. Here are some of the more common phrases you might need.

from Pimsleur Languages. It provides a solid grounding in basic Japanese with around 150 minutes of learning resources and is available from free on Amazon with an Audible trial.

link to How Widely Spoken is English in Malaysia?

Malaysia is a very vibrant and growing country in South East Asia, with a tropical climate and plenty of lure for tourists. But how widely spoken is English there? Can tourists from America, the UK...

Continue Reading
link to How Widely Spoken is English in Malta?

Malta is a picturesque and scenic small Island off the south coast of Italy, with one of the best climates in all of Europe and very good tourist attractions and cuisine. But just how widely spoken...

We use cookies on this site to improve the user experience. Continue browsing or click to consent. Find out more.